I am going to jump to the chase- tonight, on her way home from work around 10pm, one of Sunnyside’s drivers in a bright yellow Kia, nearly ran my 19 year old daughter over as she crossed Baden at Monterey. She was able to come home to tell us this story because she was fast enough to JUMP AND ROLL OT OF THE WAY.

If this had been you, or your kid, would you have come out of that well? Can you move fast enough to defend yourself against a distracted driver in a vehicle that weighs 10 times as much as you? Can your kid?

And, while we are at it, Mr. Yellow Kia Driver- You are probably a nice person. I doubt you left home tonight thinking you might kill someone with your car. The person you nearly hit tonight is my daughter, Úna. She is 19. She is finishing up a gap year before she starts studying for a degree in biotech. She is planning her first solo travel adventure after working 30 hours a week for a year to save for it. Her braces come off in September. She has regularly babysat for a dozen families in the neighborhood, and knows pretty much every kid over the age of 16. She has 2 brothers who adore her, and a father who would be doomed to leaving the house wearing ugly ties if she wasn’t there to stop it. If you had run her down, this world would be a much darker and bleaker place without her, and I want you to think about that good and hard.

You almost took her from us.

Every, single person in this City has a story. We all have value, and that value is higher than the value of your driver’s license, your car, your need to get somewhere. That is something you need to meditate on every time you get in your car.

When Your Kid Can’t Cross Your Street

Tonight I got a little wake up call. Nothing dramatic. In fact, it didn’t really strike me until I was trying to fall asleep.

My kids are all pretty big at this point. They are all old enough to get themselves to and from wherever it is they need to go without my intervention. Fully loaded Clipper cards have been supplied, and they each have smart phones that let them access all the transportation maps they could ever need. Muni is their friend and the bus stops 10 feet from our front door. There is rarely a time when I worry about how my kids will get to where they are going, even when the rain is horizontal, as it was tonight when my daughter came home from school around 5:30.

When she walked in the door, she was in a good mood, but drenched from head to foot. She told me it was way too windy for her umbrella and she had walked the two blocks from Safeway to get home. I asked if the bus had broken down or she had stopped to buy something at the store.

“No. The rain is crazy and there was no way I was going to try to cross at Edna or Detroit! Those drivers are nuts, they can’t see anything, and they aren’t stopping!”.

Think about that for a moment. The conditions for a pedestrian on Monterey Blvd. were so bad that it made more sense to walk two long blocks, in horizontal rain from winds so fierce the trees are dropping their branches on our heads than ride all the way home and get off a dry bus and cross the street at Detroit (basically straight into our front door) for the benefit of the only real traffic control on this end of the boulevard (at Foerster).

My twelve year old son would not have done that. He would have tried dashing across Detroit, where no one stops when the rain starts (not that they stop much when the sun is out).  It makes little difference that I have told him a million times not to. That is how being a twelve year old boy goes. He would have been stuck in the median long enough that he would have chanced running across when on coming cars looked like they were far enough away for him to make it, just to get out of the storm.

In his farewell address to the United States tonight, Barack Obama reminded us all that we are the ones who can change what we see. We need to work for what we want, fight for what is right. Jon and I started working for a better boulevard 7 years ago. Recently, we have started to pick up that flag again. Tonight I was reminded, again and on a directly personal level, why. We live here. We should be able to walk here, even in horizontal rain.

Posted on October 20, 2016 by Adrienne Johnson | Leave a comment

Jon and I wanted to share the letter we sent to Supervisor Yee on the subject of traffic safety on the Boulevard. We hope this will inspire you to write to him, too! Let him know how you feel about the appalling traffic danger to pedestrians and bicyclists that we live with every day. After all, if you have never had to grit your teeth and let your kids cross this craziness on their own, how would you know what it is like? If you do write a letter, share it with us here! Let’s publish all of these letters so everyone can see what we are demanding of our City.

We are writing to you as the founders of Friends of Monterey Boulevard, and residents of Sunnyside, to express our concern over the recent near fatal car vs human events that occurred on Monterey Blvd. Ming Louie and Bob Donjacour are both long time residents of your district and both were hit and nearly killed by high speed drivers, one of whom left the scene. These terrible, avoidable incidents have focused the fear and frustration of all of those who live and work on Monterey Boulevard. These last two weeks are simply the most extreme version of what anyone who spends any time on this street experiences everyday.

Monterey Boulevard has too many cars and there is no traffic control between Congo and Edna streets- yet, at the point where drivers are the most likely to be speeding (Detroit), there is an uncontrolled pedestrian crossing across 4 lanes of traffic and bookended by popular bus stops. The intersection at Edna has very high rates of drivers failing to come to a complete stop at an identified school crossing. With a corner store and bus stops that attract many, many children from the 2 schools within 1000 feet of Monterey Boulevard, this is another “accident” waiting to happen. All of these things contribute greatly to the danger of this street.

Recommendations to improve Monterey Boulevard have been made over the years, and some improvements have been made (most notably the speed limit reduction to 25 MPH and introduction of 15 MPH school zones). Other recommendations, such as a pedestrian demand crossing light at Detroit, radar speed signs between Congo and Edna, increased speed limit signage all along the boulevard, and a comprehensive study of how to reduce car usage and prioritize the pedestrians and cyclists that use this corridor daily MUST be followed through on. These recommendations were first presented officially to the City and SFMTA, and agreed upon by all parties, six years ago by The Friends of Monterey Boulevard after a traffic study was performed and published. What is needed here has been known officially for many years. That it has not been followed through with is a severe oversight that needs to be corrected immediately.

Supervisor Yee, we are sending you this letter because, as our District 7 representative to the City of San Francisco, we have elected you to use your voice and the power of your office to ensure that what this area needs to be safe is done. We want pedestrian centered light controls at the Detroit and Edna intersections. We want radar sign enforced traffic speeds along the fastest parts of the Monterey Boulevard corridor between Baden and Edna. We want up to date, comprehensive traffic calming studies conducted and implemented within the next 12 months. We invite you to partner with us to make that happen.

We at Friends of Monterey Boulevard look forward to working with you to make our street a safer place!

Plagerism! (In a good way)

Remember the window signs that appeared in widows and on poles all over the neighborhood a few years back? Well, someone else has taken up the baton and is running with it.

New signs with a very similar design urging motorists to slow down are popping up along the Boulevard. This time the signs are being posted by an ad hoc merchants association led by Dot Realty. 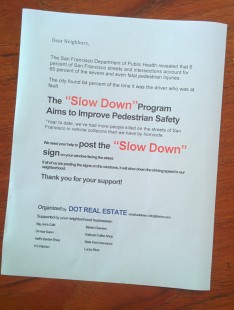 We are so happy to have the support of the local business community! Merchants (and realtors in particular) know that safe, livable streets are good for business, for home values, and for community. Go drop in at their office and pick up a sign for your window or telephone pole!

Speak out this Tuesday for lower speeds on Monterey and in the neighborhood!

Sunnyside traffic calming is on the agenda at this Tuesday’s Pedestrian Safety Advisory Committee meeting. Join with the Sunnyside Neighborhood Association Traffic Calming group to make your views known about lowering the speed limit on Monterey to 25 mph, getting a speed hump on your street or whatever bugs you about high speed traffic in the neighborhood.

PSAC os the advisory committee that reports on the needs of the city’s pedestrians to the Board of Supervisors, SFMTA and the Mayor.