GoBike bike share stations slated for Sunnyside will be on the agenda at Monday’s Sunnyside Neighborhood Association Meeting. Proposed sites are at Judson and Gennesee and Monterey at Gennesee. A site at Edna and Hearst was withdrawn due to neighbor 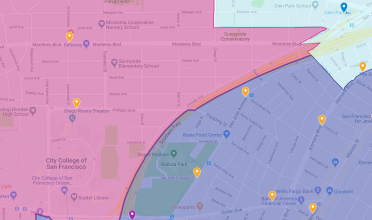 opposition and GoBike is looking for another station location to fill the gap between Gennesee and Glen Park BART. If you would like to see a station in front of your house please let us know!

Have your say in the D7 Participatory Budgeting Vote!

Every year Supervisor Norman Yee invites the citizens of District Seven vote to allocate some of the money in the budget for projects that have been proposed by folks in the neighborhood.

The four proposals that benefit Sunnyside:

In the CULTURE section:

Preparing Sunnyside’s Detroit Steps for Landscaping and Art
This project will fund needed preparations for Sunnyside’s Detroit Steps for landscaping and artwork, including the evaluation and repair of the concrete stairway structures on which art will be later affixed and the evaluation and preparation of terracing on the slope for landscaping. These necessary steps will ensure a successful outcome for the next phases of the art and beautification project, which aims to bring visibility to the area, spur small business development, and benefit the entire Monterey Corridor. We envision the Detroit Steps becoming an appealing and inspirational site for walkers and commuters as well as local residents.

Beautification for Havelock Street Pedestrian Bridge Connecting Balboa Park Station to City College and Sunnyside Neighborhood
This proposal requests funding for the beautification of the Havelock Street Pedestrian Bridge. Improving its appearance will make pedestrians and cyclists feel safer using this bridge that connects Balboa Park to the City College campus and Sunnyside Neighborhood.  We are asking for funding for improvements such as: painting the bridge, installing a mural at the west entrance, pavement cleaning, and repair.  This alternate route to the high-injury corridor of Ocean Avenue will benefit the CCSF community, cyclists and pedestrians headed to the Balboa Park BART station, and families using the Balboa Park playground, dog park, and pool.

In the SCHOOL EDUCATION & YOUTH section:

Green Gathering Space at Sunnyside Elementary School
Funding would provide small gathering areas and a pleasing natural environment for Sunnyside Elementary. Sunnyside would like to “green” our asphalt yard with small seating areas complemented by ornamental trees, a meeting area for small groups, additional plantings and a fence for the Life Lab Area. This picnic pavilion and project will provide a welcoming space for the greater community to enjoy on weekends when our yards are opened through the San Francisco Shared Schoolyard Project.

In the DISASTER PREPAREDNESS section:

Disaster Relief Supplies for Neighborhood Resilience in Sunnyside
This project seeks funding to purchase disaster relief supplies to support the rescue, triage, search and rescue and first aid efforts of the San Francisco Fire Department’s trained civilian Neighborhood Emergency Response Team (NERT) in Sunnyside and adjacent neighborhoods. These supplies will give our civilian teams the ability to respond to neighborhood emergencies if the fire department is overwhelmed in times of crisis.

Over 100 bike share supporters in Glen Park made a permit possible for a bike share station at Randall at Chenery by emailing and calling their electeds and decision makers.

Unfortunately, in early February as crews were about to install the permitted station an MTA Board member placed an “emergency hold” on the permit behind closed doors outside of the official permitting process. This was because two people complained at an in-person MTA Board meeting on January 15th that community outreach was not sufficient. This station went through two years of public outreach including multiple community meetings and hundreds of comments submitted.

This Tuesday, March 5th, SFMTA bike share program staff will be presenting on the public outreach process for bike share at the MTA board meeting. This has implications for the pace of bike share expansion everywhere. The meeting is at City Hall room 400 and begins at 1PM. The agenda order will be posted here. Please raise your voice to say enough stalling on bike share expansion! The community outreach process is thorough and long enough. Showing up at the board meeting to comment will be most effective, but you can also email the board at  MTABoard@SFMTA.com

The next Balboa Reservoir CAC Meeting will be Monday, October 15th at 6pm at City College’s Multi-Use Building, Room 140 (MUB 140). The meeting will focus on site design and architecture. I will send out the meeting agenda when it becomes available.

Later this month, there will be a public meeting to discuss the scope of the project’s Environmental Impact Report (EIR). This meeting will be held on October 30th (Tuesday), 6-8pm at the Lick Wilmerding High School cafeteria (755 Ocean Avenue). This meeting will be an opportunity to learn more about and comment on the proposed EIR scope of work. We will provide more details in the coming weeks. 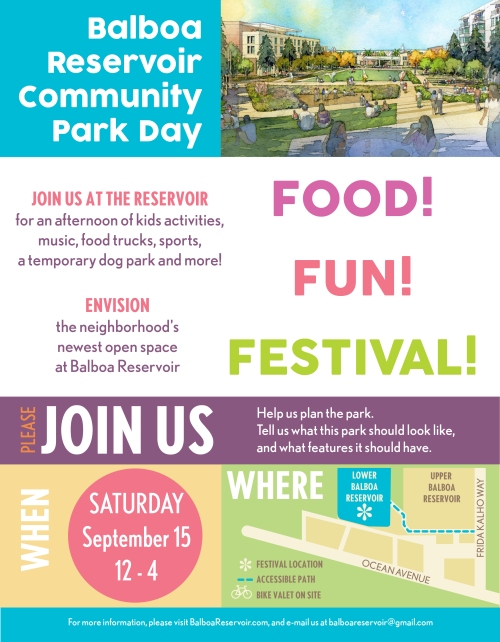 Posted on August 30, 2018 by jwinstonsf in Uncategorized

Transportation is the topic of the next Balboa Reservoir meeting

Come and discuss how transportation to CCSF, the future housing in the Balboa Reservoir and around the larger area will cope with the new population influx. Representatives from SFMTA will be there.

The graphic below comes courtesy of Swiftly, a transit data analytics company. 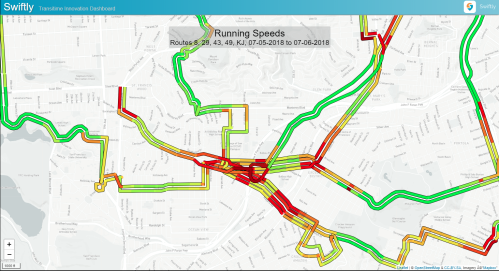 I am going to jump to the chase- tonight, on her way home from work around 10pm, one of Sunnyside’s drivers in a bright yellow Kia, nearly ran my 19 year old daughter over as she crossed Baden at Monterey. She was able to come home to tell us this story because she was fast enough to JUMP AND ROLL OT OF THE WAY.

If this had been you, or your kid, would you have come out of that well? Can you move fast enough to defend yourself against a distracted driver in a vehicle that weighs 10 times as much as you? Can your kid?

And, while we are at it, Mr. Yellow Kia Driver- You are probably a nice person. I doubt you left home tonight thinking you might kill someone with your car. The person you nearly hit tonight is my daughter, Úna. She is 19. She is finishing up a gap year before she starts studying for a degree in biotech. She is planning her first solo travel adventure after working 30 hours a week for a year to save for it. Her braces come off in September. She has regularly babysat for a dozen families in the neighborhood, and knows pretty much every kid over the age of 16. She has 2 brothers who adore her, and a father who would be doomed to leaving the house wearing ugly ties if she wasn’t there to stop it. If you had run her down, this world would be a much darker and bleaker place without her, and I want you to think about that good and hard.

You almost took her from us.

Every, single person in this City has a story. We all have value, and that value is higher than the value of your driver’s license, your car, your need to get somewhere. That is something you need to meditate on every time you get in your car.

Location: Meet on Unity Plaza in front of 1100 Ocean Avenue

Thank you for your ongoing interest and participation in the Balboa Reservoir project.